What a year was 2019. Despite the political turmoil, Shropshire Wildlife Trust was as active as ever. We can be justifiably proud of our achievements.

A rather unpromising looking 30-odd acres of former quarry land became our latest nature reserve. Don’t be deceived by appearances, its location adjacent to Pam’s Pools near Bridgnorth means that it has tremendous wildlife value and the willing, voluntary effort of our Dexter cattle is already transforming it.

Shropshire’s biggest starling murmuration is still gathering daily at dusk over another new(ish) nature reserve, Sinker’s Fields on the edge of Whixall Moss.

Our pine marten count continues to grow and we have now recorded 13 individuals living in the county. There was also a “plus one”, a marten with a radio tracking collar turned up near Ludlow that we believe to be one released in the Forest of Dean – some 50 miles away!

Our very own Stuart Edmunds received a prestigious award from the International Fund for Animal Welfare for his work on, you guessed it, pine martens.

Shropshire became the first county to start delivering Nature Friendly Schools. This Defra-funded scheme encourages primary schools to make full use of the free outdoor classrooms on their doorstep. Ellie Leach will be building the skills and confidence of teachers to use nature to deliver the curriculum and to improve pupils’ health and wellbeing.

A heartening feature of the summer was the school strikes that gained international momentum. Seeing young people taking direct political action in the face of government intransigence on climate change sent a shock message across a warming world – “How dare you”!

Newport has a long, watery heritage, hence its crest of 3 fishes. Its canal, designated a Site of Special Scientific Interest, is in the throes of being dredged and restored to make a splendid wildlife walk for the town.

Feed the Birds is helping tackle loneliness through a bird-feeding befriending scheme. Loneliness can lead to depression and extra visits to the doctor.

Capgemini in Telford has been helping staff wellbeing by encouraging them to work on nature reserves, showing that caring about nature can be good for business.

Looking after Shropshire's beautiful water! Find out how you can get involved, and see what our River Projects Team are working on… 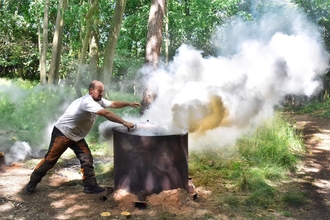 Get involved with our work to protect Shropshire's wildlife and wild places.

The government has just released its response to the 2018 bovine TB strategy review. Badger culling in high risk areas is, of course,…

Kathryn Jones is one of three trainees at Shropshire Wildlife Trust for the next year. Kathryn is a hedgehog officer trainee and will…