The population was discovered unexpectedly after the first ever photograph of a wild pine marten in Shropshire was taken by local wildlife recorder Dave Pearce in the Clun Valley. Since the photo was taken, our resident pine marten enthusiast Stuart Edmunds has captured astounding footage of a number of pine martens in the same area.

At least 18 individuals have been filmed on camera traps in Shropshire since 2015 and in 2017, young pine martens have been recorded, which would suggest that we have a breeding population in the county.

As of summer 2020 - we have confirmed there are pine martens in 9 areas of woodland in the county.

Pine martens are a great indicator of healthy woodland and the discovery of them in Shropshire shows that there is potential for them to make a return across the whole of the UK if lost woodlands can be replanted and better connected.

Find out more about the Pine Marten

What is the project doing?

We are carrying out extensive research and monitoring to determine the population size. This is being undertaken through camera trap monitoring and scat detection using a conservation sniffer dog. By identifying the habitat the species are using we can give them the best chance of survival by working alongside landowners and gamekeepers to protect the woodlands upon which they depend. We can also improve the potential for them to breed by offering safe den boxes across a wide area.

The project also aims to raise awareness of these elusive mammals, through talks, school visits and volunteering opportunities. 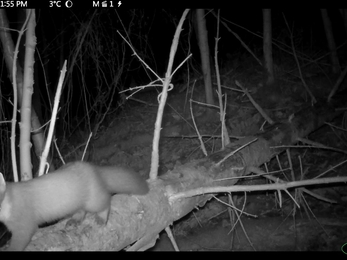 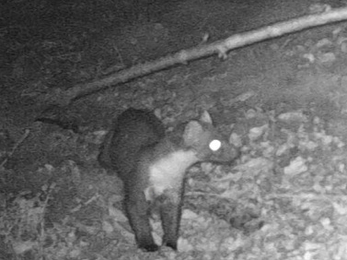 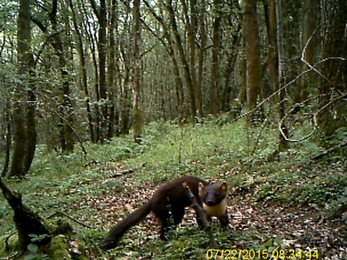 The 2nd clip of a a pine marten in Shropshire. Stuart Edmunds 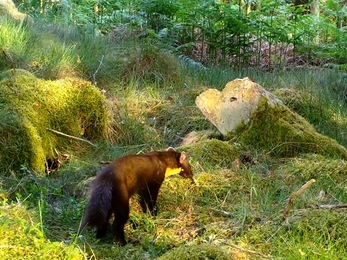 Find out more about our project from Stuart himself by watching this You Tube video.

Donations to the project will allow: